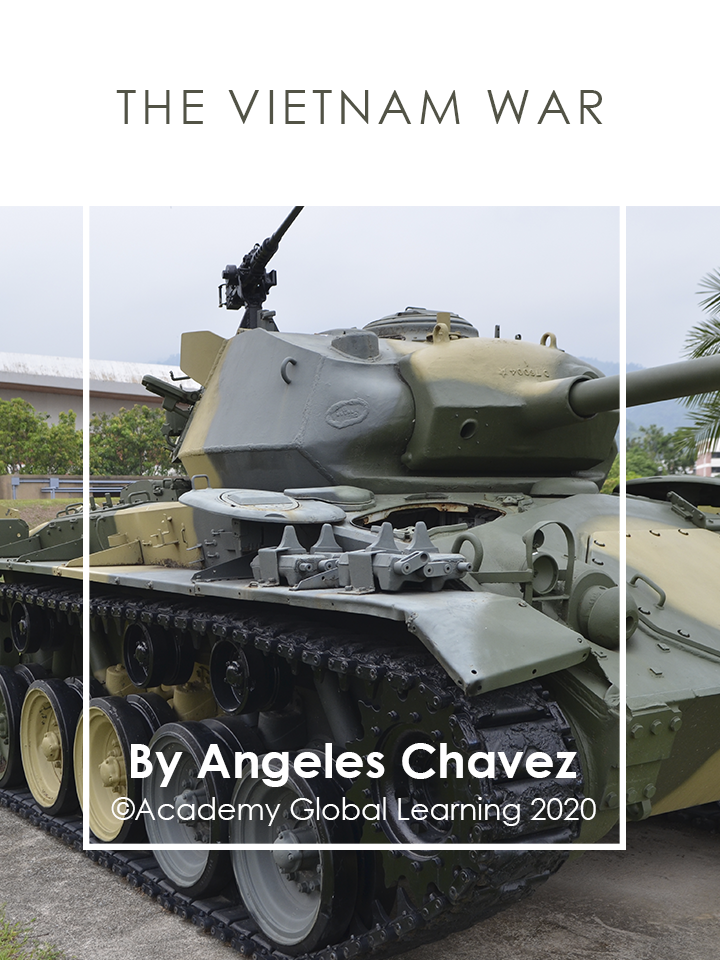 By the 1960s, most people knew that there were several hundred advisors from the United States in Vietnam, but there seemed to be no cause for alarm. For the average American, Vietnam was only a small distant country that was of little concern.

In 1965, public awareness of Vietnam changed drastically when President Johnson sent the first American combat troops to join in support of the anti-Communist regime ruling in the southern part of the country.

The opposition to the war grew when, over the course of a few years, the number of troops sent to fight in Vietnam gradually increased to over 500,000. The war was not over until 1973, when the United States withdrew its forces. 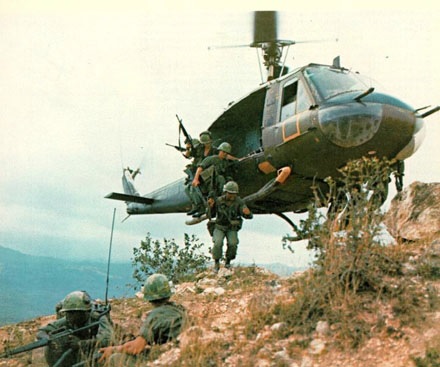 The Vietnam War divided the American people. The crowd of older Americans treasured values such as patriotism and the nation’s flag highly. The younger Americans felt that the U.S. should let Vietnam fight its own civil war.

Another aspect that greatly differentiated the Vietnam War from other wars was television. The fighting was brought into living rooms across the nation through the television. Families would gather around TV sets every evening to watch the day’s events on the battlefield.

Television not only inspired many people to oppose the war, it also changed the public’s view of war itself. The graphic scenes that were shown daily presented Americans with a view of war that they had never seen before. Television viewers became unwilling witnesses to the Vietnam War.

When President Johnson decided not to run for another term as President in 1968, his political party, the Democrats, named Vice-President Hubert Humphrey as the Democratic presidential candidate.

The Republicans chose Richard Nixon, who had served as Vice-President in the Eisenhower Administration, as their presidential candidate. Although both men ran as “peace” candidates, many voters associated Humphrey with Johnson and America’s failure in Vietnam and therefore elected Nixon. 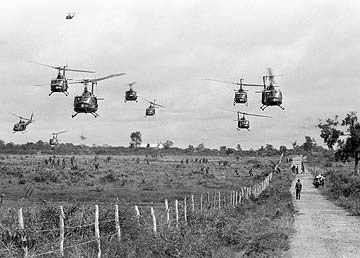 In 1969, when Nixon took office, there were over 540,000 American troops in Vietnam. The United States was not winning the war, and the American people wanted out. Nixon announced that he had a plan that would bring “peace with honor” for the United States. The name Nixon gave this plan was “Vietnamization.”

The plan was a simple strategy that, in reality, had been started under President Johnson. It asked that the South Vietnamese assume the burden of fighting the war and, in exchange, the United States would continue to provide support in the form of food and aid.

In 1969, the first withdrawal of American troops from Vietnam began. Only 285,000 troops remained by the spring of 1971, and in 1972 this number was reduced to only 70,000. President Nixon was honoring his promise to bring the troops home.

Peace talks began in Paris, France, shortly after Nixon was sworn into office. The peace talks continued for three-and-a-half years. The United States attempted to negotiate a way out of the war without having to admit defeat or abandon the government of the South Vietnamese. North Vietnam called for the complete unification and independence of all Vietnam without any foreign interference of any kind. 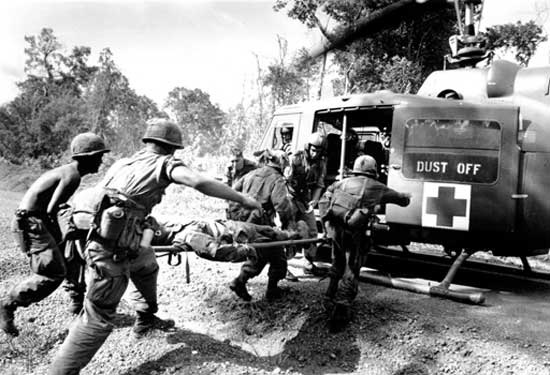 Nixon had the belief that the Communists would be more willing to negotiate if the United States increased the military pressure on them. Consequently, as President, one of Nixon’s first actions was to increase the bombing of North Vietnam. At the same time, with the intent of destroying the Viet Cong havens in Cambodia, Nixon ordered the secret bombing of Cambodia. On April 30, 1970, Nixon ordered American ground troops into Cambodia since the air strikes against Cambodia did not bring the desired results.

Congress reacted very strongly in response to Nixon’s move into Cambodia. In June, Congress repealed the resolution of the Gulf of Tonkin, which took away the President’s free hand in conducting the war. Congress also passed legislation that forbade the use of American troops in Laos.

Nixon continued to broaden the war despite the opposition from the public and Congress. In February 1971, South Vietnamese troops crossed into Laos with air cover from the Americans. Their mission was to cut off the Ho Chi Minh Trail and destroy the Viet Cong sanctuaries. 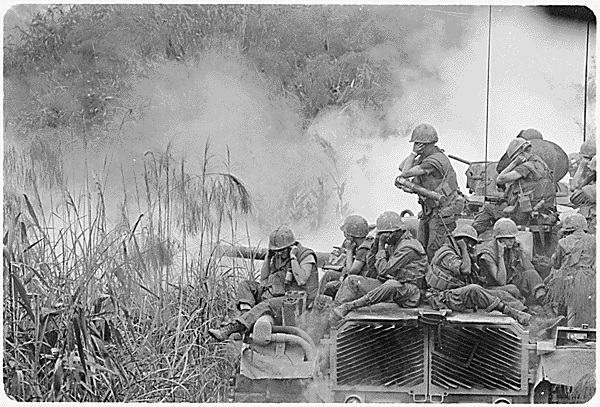 The South Vietnamese troops suffered a great and decisive defeat. The entire South Vietnamese force would have been completely destroyed if their retreat had not been covered by American air power. With the failure of the Laos mission, it was clear that Nixon’s “Vietnamization” was not working.

North Vietnam launched a massive attack against the South one year later. On March 30, 1972, forty thousand troops along with several hundred tanks crossed the border into South Vietnam advancing rapidly, capturing many important towns and moving within 60 miles of Saigon, the capital of South Vietnam.

The only thing that stopped North Vietnam was the intense American air power. With the help of the U.S. Air Force, the South Vietnamese eventually recaptured the territory that had been lost in the spring and managed to push the North Vietnamese out.

Much like the previous Laos invasion, the Communist offensive in March showed that the South Vietnam Army was not capable of carrying on the war without American air support. North Vietnam knew that victory would be within their grasp once the Americans left South Vietnam. American troops were pulled out of Vietnam in 1973. 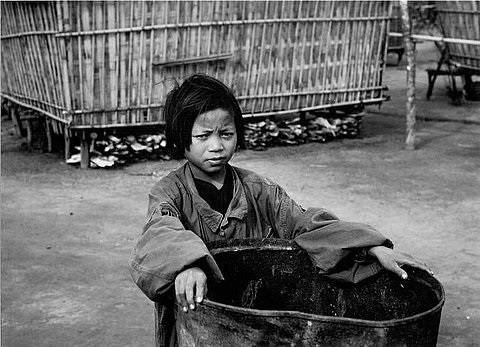 In April 1975, the Viet Cong and North Vietnam defeated South Vietnam. They accomplished what nationalists had been trying to do since World War II. The nationalists had been trying to unify Vietnam under one government free of any foreign interference. This government was, of course, a Communist dictatorship. The North Vietnamese renamed Saigon Ho Chi Minh City as a tribute to their long-time leader who had died in 1969.

Americans tried to come to grips with the war that had torn the nation apart. The Vietnam War cost taxpayers $150 billion and resulted in the death of 58,000 troops. In addition, more than 300,000 others had been wounded in the war and several thousand other soldiers were declared missing in action. Many of the soldiers that were declared missing in action are still not accounted for today.

Shortly after many of the American soldiers of the war returned home, they began to experience health problems. These health problems were attributed to their exposure to Agent Orange, a defoliant that was used extensively in Vietnam. 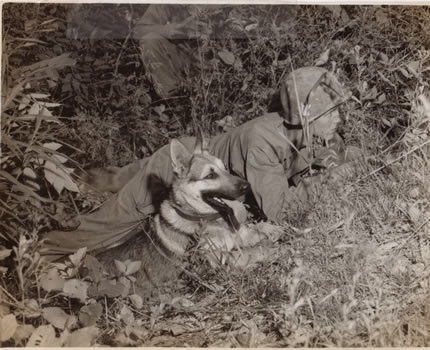 Thirty-four thousand people filed claims with the Veterans Administration requesting benefits to compensate them for the contraction of cancer and other diseases. The Veterans Administration refused to grant them benefits for a number of years using the excuse that there was no proof that Agent Orange caused cancer. In 1991, after an extensive amount of evidence showed a connection between Agent Orange and cancer, the government finally agreed to pay full disability to the service men that qualified.

The Vietnam War veterans did not receive recognition for their service and sacrifice until 1982. On Veterans Day in 1982, the Vietnam Veterans Memorial was dedicated in Washington, DC in their honor. The memorial is a wall of black granite constructed in a V-shape. The wall is inscribed with the names of 58,000 Americans that gave their lives for their country in the Vietnam War.

On the opening day of the memorial, thousands of people paraded by the two massive slabs of granite looking for the names of their friends and loved ones. People left flowers, letters, and other mementoes at the memorial. 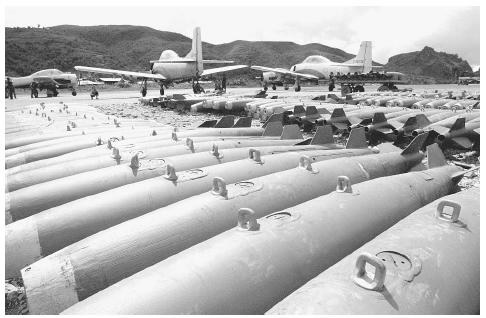 The legacy of the Vietnam War lives on even though it has been over for a quarter of a century since the war. The Vietnam War changed not only the way people think about and view war, but also the way they view their government. In the recent history of our country, there has not been another war that has impacted the American people so deeply and profoundly. 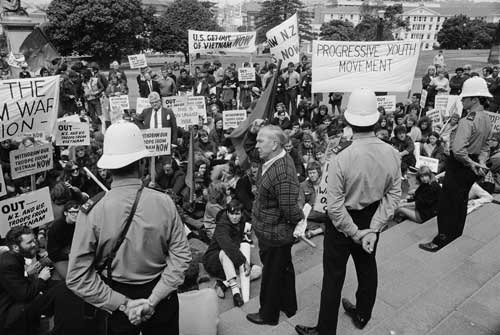 Write one sentence to describe the history of the Vietnam War for each area below: